Feeding management, although based in nutritional sciences, does combine some elements of art and artistry. Feeding management is an integrative process whose goal is to provide an adequately formulated diet resulting in sufficient consumption of a variety of nutritional elements to meet daily nutrient needs for each animal. Factors to be assessed include the natural environment including temperature, housing and activity, animal groups and interaction as well as feed availability. We have designed our feeding facilities – as simple as they are – to account for the size, number and personalities of the animals, the social hierarchy of the grouping and individuals, as well as pasture availability and quality of forage.

Alpacas have a narrow mouth structure with prehensile lips which permit them to be very discriminatory in choosing the grains, pellets and other mixed nutritional elements they want to eat. Watching alpacas feed on hay or grains can be a lesson in itself. Sometimes only the finest green orchard grasses are selected, other times, small pieces of cracked corn will be discriminately scooped up. Grazing activity of alpacas are again opportunistic and selective. We have witnessed their enjoyment of taller grasses in the wet spring but shorter grasses during the heat of the summer months. We rotate our pastures throughout the season to provide for optimum grazing under differing weather and temperature scenarios.

To compliment open, year-round grazing, we feed our alpacas orchard grass hay and a combination of crimped oats, pellets and other mixes. During those months prior to birth, we supplement their daily food with lactation stimulating herbs and sometimes vitamins A, D, and E which get concentrated in colostrums which is the first nutrition ingested by a newborn cria. All animals get a daily vitamin mixture in their food and access to clean water. They eat twice per day and graze out in our fields to their hearts content. Once per month, they get required shots.

Our experience has shown us that alpaca care management is not complicated, difficult or time consuming. Monthly de-worming, annual booster shots to ward off infectious diseases and parasites, the quartering toe-nail trimming, and the shearing of fleece once annually in late April or May, constitute the main components of care.

Female alpacas can weigh anywhere from 100-150 lbs; males weigh anywhere from 140-180 lbs. Alpacas are ruminants with a single stomach divided into three compartments so they produce rumen and chew cud. Therefore, they consume smaller amounts of food than other large animals. One to one-and-a half 60-pound bales of hay per day in the winter can generally feed about 20 alpaca. Their food consumption is interesting. The alpaca only have teeth for eating on the bottom. On the top, they are a hard gum – a dental pad – against which they crush grains and grasses, in a back-and-forth grinding manner. A split upper lip facilitates this back-and-forth action. They also have a short tongue that is attached to their jaw so they don’t rip at grasses the way longer tongued animals do – such as goats and sheep. Alpaca are pastoral grazers who nibble grasses and other plants down to about 1 inch, thereby disturbing the roots of vegetation less than other domesticated livestock. In this way, alpacas are environmentally friendly species that can be raised in herds of five-to-ten alpacas per acre, depending on layout of fencing, terrain, rainfall and growing season, the quality of pastureland, among other factors. In addition, because their relatively low-body weight is nicely distributed on soft padded feet with a leather-like texture, compaction or damage to the terrain is less than with other domesticated livestock.

We have found that it is often advantageous to separate young males from older males where the older males are aggressive and exhibit dominant behavior that sometimes can involve biting and kicking. In addition, some dominant males need to be separated from others who are very attached to ‘their’ females. Otherwise, alpacas are quite social creatures, with individual temperaments that vastly differ.

Alpacas love the snow and cold weather. Although when it is below 0 degrees centigrade for several days and nights, we have found that the animals benefit from heaters – as our barns are effectively four-sided but still open to the air and outdoors even in the worst blizzards. Infra-red heaters create a wonderful warm and take the ‘bite’ out of the air for a circumference of about 6 feet. The animals tend to lie under the heat for a period of time, and then let others take their place. During this time, we also add additional cracked corn and some soy meal to their grain mixture for additional winter sustenance.

In the summer months, we provide a large, soft rubber bucket for them to lounge in, with only a few inches of water. In the heat of the day when the thermometer reaches 90 degrees or so, we cool them off with cool water from a hose. We spray their tummies and legs so as not to drench the blanket fiber. Alpacas push to take turns, turning this way and that, through the spray. Often afterwards, they will take a ‘dust bath,’ rolling in the dry dirt… a lovely sight after we have just groomed and cleaned them up. Luckily, even a small wind will blow the dust from their coats.

In warmer weather it is important that alpacas have sufficient electrolytes that can be provided in water; salt, potassium, glucose and bicarbonate help replace losses that occur when an animal is responding to heat.

Interesting, alpacas ‘try’ to go to the bathroom as a group in one spot. When we say ‘try’ we mean ‘try.’ A single ‘poop’ spot can be 2 feet in diameter depending on how many animals are using the ‘spot’ on a daily basis; with dribbles and drabbles here and there…. There are also may be secondary and tertiary spots further away in the field or around a corner. These communal dung piles generally remain well established but can migrate or change when new animals get introduced to the herd. It is also interesting that several animals in a row decide that they need to ‘go’ all at the same time… they actually wait around until their turn! It’s like it is intermission time at the theater!

2019 Fall and Early Winter Market Schedule Announced. See You There! 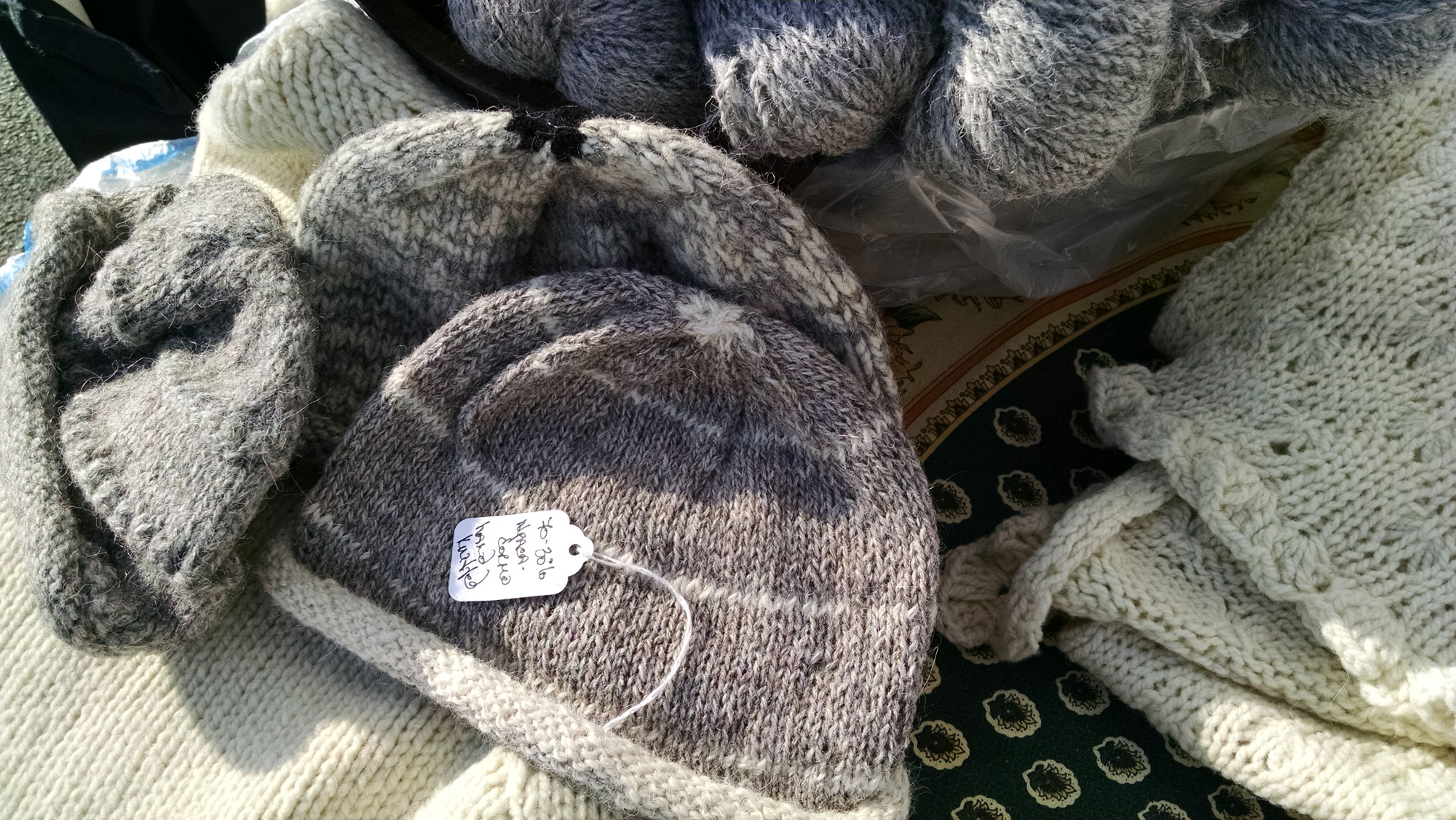 We work with Starry Nights Mill in Oregon to provide you with the finest spun yarn and roving. Winner of the “2003 AOBA Mill of the Year” award at the National Fiber Conference.
[more info]

Please contact us at arnow@optonline.net or 914-764-4778 for scheduling and directions.